The Grande Dame of Paris – Hôtel de Crillon has gone into hibernation since April 2013. She was undergoing a facelift. I heard she has reopened its doors already. Let’s take a walk down memory lane…

Hôtel de Crillon possesses a rich history. King Louis XV commissioned the palace’s construction on Place de la Concorde in 1758. On its first floor, Queen Marie Antoinette took music lessons, but ironically, was guillotined in front of the palace during the French Revolution. Crillon was also the site for conclusion of the French-American Treaty and founding of the League of Nations. More recently, Crillon was acclaimed for Le Bal des Débutantes, where the renowned ball presented past debs, including countless European royals, children of Hollywood celebrities, billionaires & politicians & their families – such as nieces of George W. Bush & daughter of Phil Collins. 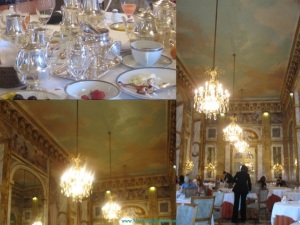 After sending off its last guests in March 2013, the Hôtel auctioned off pieces of Crillon memorabilia – from furniture to wines to staff uniforms to bathrobes. Though I couldn’t attend the auction, I fortunately held a few Crillon memories of my own.

My hubby, Mr. King & I stayed at Crillon on several occasions. I recalled walking through its revolving doors and was immediately greeted by the most charming hotel boutique that offered the loveliest items from stationery to scarves to slippers. The palatial lobby was decorated with marble floors, glittering chandeliers, enchanting floral arrangements and neoclassical furniture. In contrast, we found the décor of the guest rooms subtle, elegant and always comfortable.

Breakfast at Les Ambassadeurs, the hotel’s very regal restaurant was pure entertainment. When compared to the salon that was covered with gold embellished mirrors, mural ceilings and chandeliers, it was difficult for me (dressed in my tourist attire) not to feel a bit underdressed. The servers would push a silver trolley full of pastries and bread in front of us for our selection. Somehow it reminded me of the extravagance of Sofia Coppola’s Marie Antoinette. A “small” buffet (yogurt, cereals, fruits, deli, salmon, salad, cheeses) was displayed elegantly in the adjoining salon. While the hot dishes were prepared in the kitchen, their presentation was no less flamboyant with servers simultaneously pulling the silver dome covers off the plate and exclaiming “Et voilà!”

During our last stay there, we had an early flight and decided on room service. Petit-déjeuner pour deux (breakfast for two) came in two trolleys – with salad, fruit cocktails, fresh fruits, smoked salmon (200grams!), ham (another 200 grams!), yogurt, oatmeal & a silver “punchbowl” filled with bread. What a treat!

Other articles you may enjoy: Pink Robes & Cherry Soup at Ritz Paris