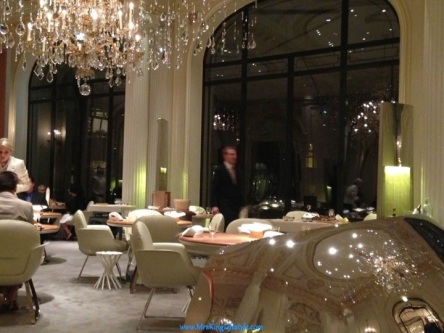 Paris, October 2014 – My hubby, Mr. King & I were fortunate to be in Paris, shortly after Plaza Athénée reopened post-refurbishment. Our last memories of Alain Ducasse were ones of a traditional French restaurant. So the revamped Alain Ducasse au Plaza Athénée (#47 Best Restaurant in 2015) was a “grand surpris!” 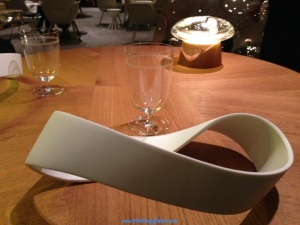 The elegant chandeliers are still there, but accompanied by much more contemporary furnishings, with lots of white leather and shiny surfaces. Patrick Jouin and Sanjit Manku were the designers behind the immaculate décor of the dining room.

The tableware, such as flat wooden spoons and dainty blue & white plates, somehow embodies a sense of fine Japanese aesthetics.

From the moment we were greeted to our departure, Mr. King & I felt the attentiveness of each of every staff, including the General Manager who personally made rounds to speak with each guest.

Aside from the apparent changes in the interior design, Ducasse also established a dynamic shift in the cuisine. Naturalite or naturalness is the theme and essence of his new repertoire. Perhaps, the concept is best described by the restaurateur.

“Here, Alain Ducasse tells a personal and radical story, continuing the work he began twenty-five years ago. He represents the naturalness cuisine, inspired by the fish-vegetables-cereals trilogy, with the help of his chef of Romain Meder. Healthier and more natural, more respectful of the Planet, it delivers a free and nearly instinctive interpretation of Haute Cuisine, revealing the produces’ original flavour, from the noble to the humble, all exceptional.” (www.alain-ducasse.com/en/restaurant/alain-ducasse-au-plaza-athénée) 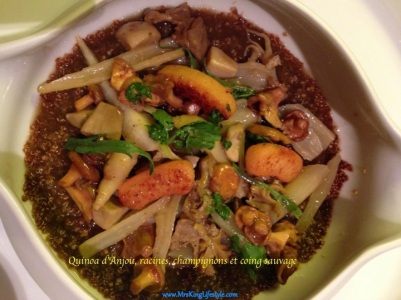 Every course, including the numerous complimentary dishes like the amuse bouche and seafood rice, was exceptional with impeccable presentation. Just like Ducasse described above, the tastes of the produces come through in each dish. The menu is dominantly fish, seafood, grains and vegetables.

By chance, the two courses that Mr. King ordered both included quinoa, a whole grain or seed. A healthy touch to them!

The entire dining experience was extraordinary…a genuine indulgence for the senses. It is Haute Cuisine at its finest, without the heaviness or stuffiness.

Prior to its renovation, the restaurant held 3 Michelin Stars for a number of years. At this time, with an overhauled style and menu, the restaurant has no stars to its name and yet to know its fate…until early next year (I think) when the Michelin Guide for Paris is published.

I personally find this autumn the most opportune time to visit since the staff and chef are certainly on the highest alert…as no one knows when the mystery Michelin agents will drop in to dine.   Bon appétit! 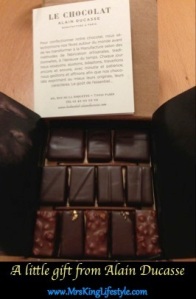