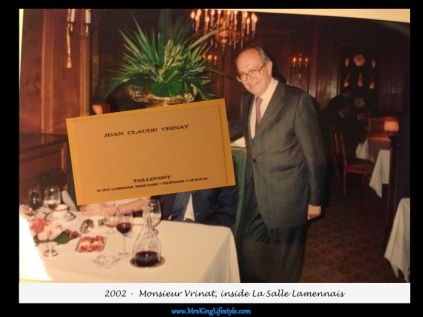 Everyone should have 3 culinary experiences, so exceptional that one remembers them for a lifetime. For Mr. King and me, Taillevent in Paris is one of those unforgettable experiences.

Spring 2002 –Mr. King put me in charge of our itinerary – food, culture and shopping. For the restaurants, I decided on ones that both of us have not patronized before. I relied on the Michelin guide for my research, and stumbled upon Taillevent, which held the second longest record for a Michelin 3-stars restaurant. Little did we expect, Taillevent would become our favorite restaurant in the world, and we kept returning to it.

Taillevent has a special place in our hearts for a few reasons.   Its subdue, yet elegant dining room, La Salle Lamennais, was filled with mostly “loveseat-style” tables, facilitating an intimate ambience. French food has a reputation for being creamy and rich, but at Taillevent, its dishes were perfectly seasoned and flavors were impeccable.   The service at Taillevent was flawless. Last but not least, the most impressive of all was our encounter with its proprietor, Mr. Jean Claude Vrinat (son of founder Mr. Andre Vrinat) who not only greeted us, but throughout our meal, chatted with us and took a sincerely keen interest in us, two young Asian travellers.

Winter 2003 -Mr. King and I decided to stop by Paris and to spend our New Year’s Eve at Taillevent. Mr. Vrinat greeted us like old friends. Needless to say, the New Year’s Eve degustation menu, which included Oeuf brouille au caviar oscietre d’Iran, noix de coquilles Saint-Jacques au beurre demi sel and homard Breton roti aux chataignes, was exquisite.  The most beautiful part of the evening was at the stroke of midnight, the maître d’ strolled around the tables with a “gong” to ring in the New Year; then Mr. Vrinat would present each lady with a small bouquet of flowers. The experience was not over…two weeks later, I received a personalized New Year card from Mr.Vrinat. 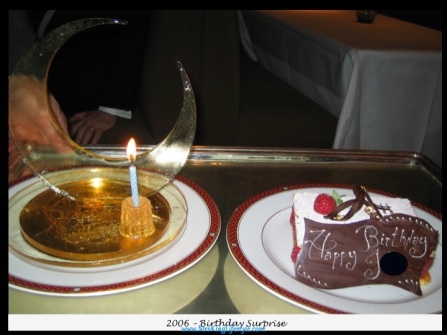 Spring 2006 – We celebrated Mr.King’s birthday at Taillevent. I had liaised with Mr. Vrinat ahead of time, but yet, I didn’t expect the birthday surprise that he had his pastry chef prepare for Mr. King. Once again, lunch could not be finished in 4 hours, and we happily forfeited our shopping for the afternoon. That was the last time we saw Mr. Vrinat, though we continued to receive his holiday greetings every winter. 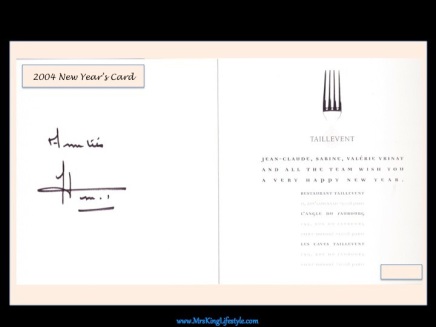 Spring 2008 – I contacted Mr. Vrinat to arrange our reservation for our next trip. To my surprise, a lady replied and informed me that Mr. Vrinat had passed away that January. Mr. King and I were saddened by this news. We had such fond memories of Taillevent, not only because of its food and service, but the presence and attention of Mr. Vrinat. To add to our disappointment, we found out that Taillevent had been given a Michelin 2-stars, ending its long run with Michelin 3-stars. 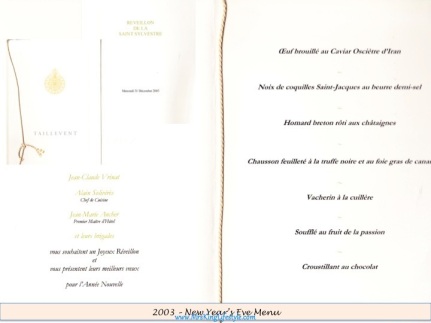 To us, Taillevent was the prime example of the French culinary experience at its best! Merci beaucoup, Monsieur Vrinat!