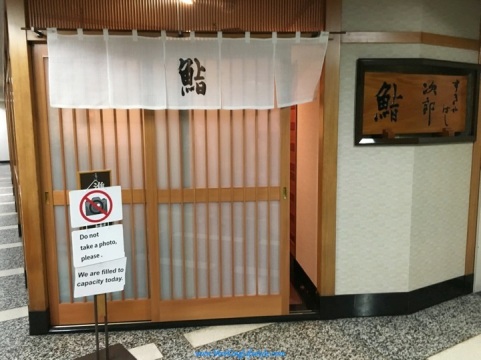 Tokyo, June 2016 – I finally made it to the most famous sushi restaurant in the world – Sukiyabashi Jiro in Ginza. It was an experience of a lifetime: 1) Jiro’s omakase was exquisite, 2) Watching the masterful Chef Jiro Ono craft each sushi was a graceful performance in itself, 3) A privilege to eat sushi prepared by the 90-year old chef who has dedicated his life to the art of sushi and 4) this was the most expensive dinner ever – at US$21 per minute (US$630 for 2 persons for a 30-minute meal). One thought that kept flashing in my mind was “Respect” – respect for the artisan, the craft, the sushi, the environment and the culture.

Being a sushi addict, Sukiyabashi Jiro was at the top of my foodie wish list. I was captivated by the beautifully filmed documentary “Jiro Dreams of Sushi”, about the 90-year old sushi Chef Jiro Ono, founder of the three-Michelin Star Sukiyabashi Jiro (#44 Asia’s 50 Best Restaurants 2016).

This post is a bit different from my usual posts since photos were strictly prohibited at the restaurant. 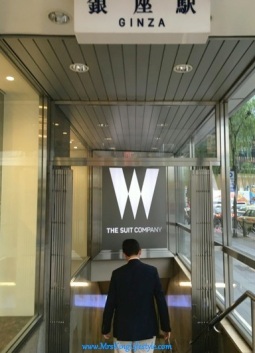 Jiro only accepts reservations a month prior to the desired dining date.  An introduction by a reputed hotel is required for foreigners who wish to make reservations. Fortunately, my hotel secured the reservation for us, with a credit card guarantee.  I was ecstatic when our booking was confirmed.

The hotel provided more information to ensure that we understood the dining etiquette and Jiro’s policies:

– Cancellations without penalty are only accepted 10 days prior to the reservation date. Otherwise 16,200 yen plus 10% handling charge and tax per person will be charge to your credit card. Please kindly understand their strict cancel policy that they do not accept any excuse such as traffic jam, transportation delay included flight, health problem, family emergency or other personal matter.

– Dress code: Must wear Jacket or collared shirts. NO jeans, T-shirts, shorts and flip-flops. Also NO perfume & NO photos. Otherwise they do not allow you to enter the restaurant even you are there on time. When we arrived at our hotel, our concierge also advised me – please do not use richly perfumed or flavored hand creams or body lotions.

– Please note that dinnertime will be about 30 minutes to finish course. Please kindly accept this Jiro style.

Of course, I was already too happy to accept Jiro style.

5:30pm – Mr. King and I arrived at our reservation time, precisely on time. We found 3 other people seated at the counter already. The Asian man was about 2/3 of his way through his omakase, while a Japanese couple was almost halfway through the 20-course dinner. That made me wonder if we were considered late, by Jiro standards.

Before we were seated, the young apprentice requested that I leave my handbag and any paper bags at the cashier. The apprentice placed them on a shelf along with belongings of other patrons. I assumed that this was part of the reinforcement of their “no photo” policy. 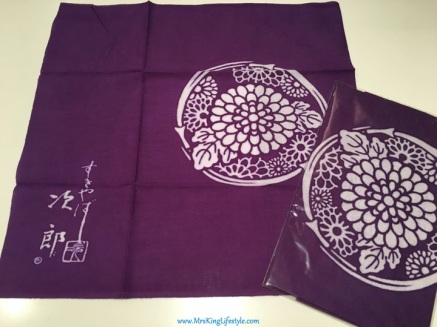 5:35pm – I was so excited to be seated right in front of Jiro-San, who was recognized as “Japan’s living national treasure” by the Japanese government in 2009. We greeted Yoshikazu-san (son of Jiro-san) and Jiro-san with a “Konnichi-wa”, and Yoshikazu-san nodded while Jiro-san reciprocated the greeting.

The decor was exactly as it was in the film – simple sushi counter in light color wood with 10 seats. It was surreal, just as if we were in his film. The table setting included a purple cloth souvenir printed with Sukibayashi Jiro in Japanese on it and a menu printed in both Japanese and English with the date of our dinner.

A young apprentice, who spoke some English, served us drinks.  Of course, we abided by what Jiro-san suggested in his book Jiro Gastronomy – tea is the best accompaniment for sushi.

The restaurant was very quiet. The Japanese couple was hardly talking to each other, except for the occasional whisper. Mr. King and I whispered too.  Everyone seemed to be absorbed in watching Jiro-san perform his magic. 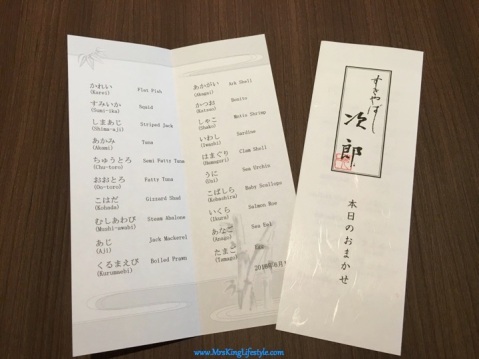 Omakase – There is no menu, only omakase or chef’s choice is served. The omakase dinner consists of 20 pieces of nigiri:

Overall, the sushi was of excellent quality.  To Mr. King and me, the exceptional ones were:

Sumi-ika (squid) – Though we had expected to taste the famous (45-minute massaged) octopus, we were delighted with the sumi-ika, which was chewy and refreshing.

Oo-toro (fatty tuna) – Jiro’s Oo-toro is definitely the highest quality I have ever tasted. It had a light pinkish color, and the tendons were so fine.  It just melted in my mouth.

Kurumaebi (Japanese tiger prawn) – Interestingly this piece was shaped by Jiro-san, and then he passed the entire sushi to his apprentice for cutting; after which, Jiro-san placed both pieces on our plates. We ate the tails first, followed by the heads. The roe in the shrimp heads contain a strong flavor. Therefore, by eating the head last, the taste of the tail is not overshadowed. The rich taste was like no other Kurumaebi I have tasted.

Mushi-awabi (abalone) – Jiro’s abalone was very fresh and tender, and perfectly sliced (not too thin or thick).

Hamaguri (clam shell) – We were surprised to have this clam since the season for it runs between November to March. This is part of classic Edo-style sushi. What a treat! The portion was sumptuous, and the clam was very tender.  According to Jiro Gastronomy, “Because clams become tough quickly when cooked, we place it on the fire for a short time. We then steep it in broth, to which we add seasoning like sugar and soy sauce to adjust the flavor.” The sweet sauce that accompanied this sushi was perfection.

Katsuo (bonito) – Flavors from the smoking process was extremely pronounced. I literally envisioned the fish being smoked above a charcoaled stove as I enjoyed this piece.

Shako (mantis shrimp) – This was another incredible sushi. Only a master can produce such flavor in this shrimp. We were in luck, as the season for this shrimp just started in June.

Anago (sea eel) – It was lightly seasoned, so the sweet soya doesn’t overpower the sea eel.  The conger eel was so soft, like biting into thick potato puree. According to Jiro Gastronomy, “Because we cook anago to be very tender, serving it in sushi is very difficult. It is perhaps the most difficult sushi to prepare. When shaping the sushi, you can’t place any force on top of the anago.”

Behind the sushi counter, there were only Jiro-san, Yoshikazu-san and one apprentice. Almost every piece of sushi passed through the hands of Jiro-san before it reached our plates. Few exceptions were: Uni, Kobashira and Tamago, which were placed on our plates by either Yoshikazu-san or the apprentice.

The pace of service was very fast, and we tried to follow the protocol that each sushi should be consumed within seconds after hitting our plates.

6:00pm – All 20 pieces of nigiri had been served. Jiro-san disappeared into the narrow passageway leading into the kitchen. Yoshikazu-san finally asked us in Japanese if we wanted anything else, and announced that concluded our omakase. Yoshikazu-san seemed more serious than his father.

The young apprentice appeared and asked us to move over to the low table for our desserts – juicy, sweet Japanese musk melon. Interestingly, above our table, I noticed a drawing that seemed a bit out of place in this traditional Japanese restaurant. It was a colorful cartoon of Jiro-san and Yoshikazu-san making sushi for Mickey Mouse and Donald Duck. In my mind, I was thinking, “They do have a sense of humor after all.”

The apprentices set up the counter for the next seating, which I suspected to be at 6:30pm. It is my personal belief that the restaurant does not fill up all the seats on purpose, because 1) the last 3 seats at the counter end (towards kitchen) were kept empty (no table setting) for our seating as well as the next, and 2) every patron is served by Jiro-san personally.

6:03pm – We were the only patrons in the restaurant. I requested the apprentice to ask if Jiro-san would autograph my copy of his book, Jiro Gastronomy, which was in my handbag. So the apprentice politely obliged, and fetched my handbag for me. 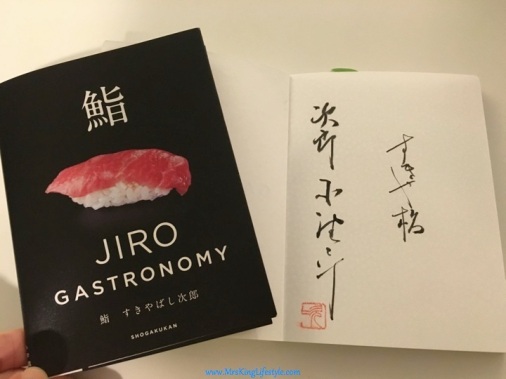 Jiro-san reappeared, and sat at the table behind us. The two apprentices brought out his calligraphy set and ink stamp. It was beautiful to watch Jiro-san write his name in Japanese calligraphy.

6:08pm – While paying our bill, I asked in my rusty Japanese if we could have a photo with Jiro-san and Yoshikazu-san. The apprentice politely asked us to step outside the restaurant and wait. Momentarily, Jiro-san appeared. He was very gracious, and tried to adjust our positions to ensure that Mr. King and I did not block the restaurant signage. 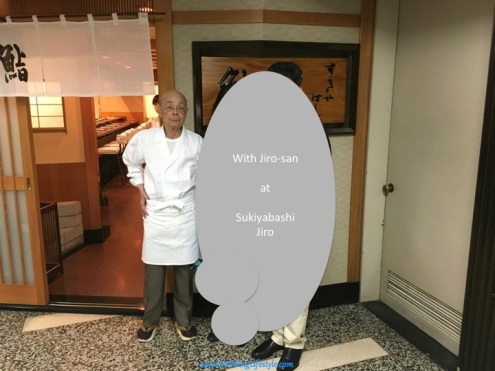 While our photos were being taken, patrons at the neighboring restaurant can be seen peering out at us – like Jiro-san was a celebrity sighting.

Jiro-san spoke to us briefly, and then we bid farewell. We walked towards the glass door exit connected to the subway station. As expected in the Japanese culture, Jiro-san and his apprentice were still standing at the door and bowing to us when we turned around.

6:15pm – After walking up a flight of stairs, we reached the street level of Ginza subway station entrance.

Both Mr. King and I appreciated the entire culinary journey despite the swiftness of it. The Jiro experience was purely about his sushi, his craft and the respect for his art. We both agreed that it was worthwhile and at the very least, we have satisfied ourselves with the knowledge of what spectacular sushi should taste like.

For more information on Sukiyabashi Jiro,  food blogger – Luxeat.com has very beautiful photos of the sushi, when photography was still permitted at the restaurant.  Also check out Daniel Food Diary who has a nice post about the sushi restaurant with Jiro-san’s younger son, Takashi Ono at the helm.