Barcelona, December 2016  – After two Barcelona-based friends both raved about its creative tapas, Paco Meralgo was at the top of my list of tapas bars to visit.

Decorated in ivory tones with purple accents, the bar had a modern minimalistic aesthetic. There was a lively atmosphere with patrons seated on high chairs around the counters as well as at individual tables.

Given the extensive menu with a number of attractive choices, it was not an easy task when it came to ordering. My friends had given me some suggestions, including the tuna, squid and Palamos shrimps. On top of those, we found a few more interesting tapas to try.

Tuna salad with tomatoes and onions 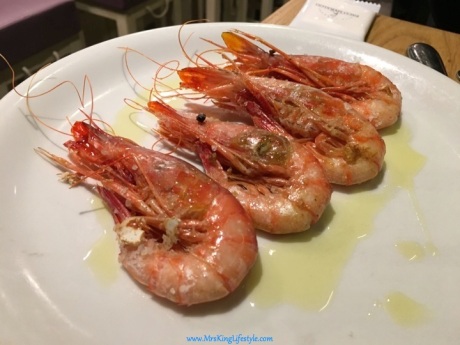 Grilled red prawns from Palamós – they are charged per 100grams.

Each tapa was delicious and possessed originality.  I would say our selection was a good mix of their seafood and meat dishes.  We didn’t leave quite enough space for dessert, but still managed to squeeze in a Crema Catalana. I highly recommend this dessert… despite its having a thinner texture than the usual Catalan custard, the vanilla flavors were powerful and so rich.

We prefer casual dining, so Paco Meralgo was the perfect hangout for us. Paco Meralgo has that friendly atmosphere where one could linger for hours over bites and wine.  Mr. King and I already declared that Paco Meralgo is a must-go on our next trip to Barcelona.