Issaya (meaning “Rainy Season”) is situated inside a bungalow located in a quiet neighbourhood of bustling Bangkok. “Chef Kittichai is a pioneer in farm-to-table dining in Thailand and incorporates his purity and freshness beliefs into Issaya. Issaya also features Chef’s garden where guests can see aromatic Thai herbs grown year-round. ”

Mr. King and I found no lack of choices from the extensive menu. We decided to choose a selection of dishes including a few of Chef Kittichai’s signature creations. This was our favorite meal on this trip to Bangkok. Each dish possessed heart and soul. Chef’s use of spices was superb, especially the Issaya-spiced rubs and house-blended chili paste.

Kradook Moo Aob Sauce – Spiced rubbed Pork Baby Back Ribs Glazed with Issaya House-Blended Chili Paste. Served on a charcoal burner, this sumptuous dish looked more like the main course than the appetizer. The ribs were amazingly tender and that generous layer of chili paste gave it quite a “kick”!

Mussamun Gae – Lamb Shank Simmered in Mussamun Curry Served with Picked Cucumber. At first glance, the lamb looked just like any other curry. One taste revealed the richness of the spices in this curry. No wonder this is a signature on Issaya’s menu.

Choo-Chee Salmon Rom Kwan – Slow Cooked Smoked Salmon with Jerusaleum Artichokes from Chokehai Farm. I wished I had taken another photo after I cut the salmon, which was perfectly cooked with a gorgeous pink color at the center. And the taste was as good as it looked. 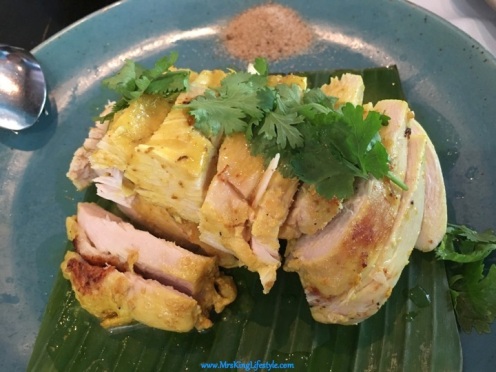 Gai Aob – All Natural Sankaburee Chicken, ‘Issaya-spiced” rubbed and Charcoal Grilled. This plate of chicken breast meat looked unconventional, but that was before the flaming cognac was added to give it the drama. Again, the seasoning gave this chicken a very different taste.

Kanom Tung Taek – Cold Coconut Crepe Souffle for Two with a Variety of Thai Condiments. This dessert literally and physically blew us away! It was kind of like a “deconstructed” soufflé…the chef started by placing two banana leaves on the table. Then she added coconut milk, fresh coconut shreds, mulberry sorbet…and last came a chocolate shell or bowl, in which the chef poured some liquid nitrogen into the plate…she begun to churn the bowl… then it all happened so fast! 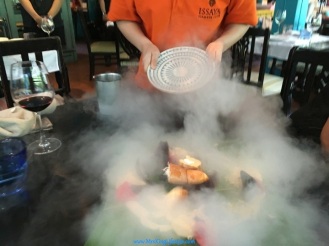 Suddenly, “something” landed on a table with a loud “bang” and before we knew it, all of us felt the ice-cold droplets on our laps. After the smoke settled, the beautiful dessert was revealed. The combination of chocolate, soufflé , coconut and sorbet was heavenly.

Issaya Siamese Club is certainly the place to dine at, if one is seeking innovative Thai cuisine with traditional ingredients. One can expect only the most beautiful cuisine in serene surroundings at Issaya.

More about the Chef – “Chef Pongtawat “Ian” Chalermkittichai (a.k.a. Chef Ian Kittichal) is Thailand’s first international “celebrity chef”. An unlikely candidate, Ian came from humble roots pushing a food cart through his Bangkok neighborhood as a child. With a weekly cooking television show since 2001, Chef Mue Thong (Golden Hand Chef), which can be seen in over 70 countries around the world, his audience is truly global.” He has also created a number of dining concepts in major cities such as New York, Mumbai and Barcelona.

All photos were taken by Mrs. King. All quotes were from http://www.issaya.com.