Taipei, December 2017 – Jiangle Kappo Sushi 匠樂日本料理 is one of the best sushi restaurant that I have ever been to. Mr. King’s foodie friend told us that we must go to Jiangle if we go to Taipei. After I found out about their “no photo” policy, I informed Mr. King that we were going to the “Jiro of Taiwan”. Aside from the no photo policy and the amazing sushi, Jiangle couldn’t be more different than the world-renowned Sukiyabashi Jiro (of Tokyo).   The ambience was very lively, with a lot of rapport between chefs and patrons, and our meal easily extended beyond 2 hours.

Jiangle’s two sushi chefs (both Taiwanese) worked as a team to serve the clients, and some pretty interesting dishes were presented in between serving traditional nigiri sushi.   There were a choice of 3 omakase menus, and we selected the medium priced one (NTD5,000 or USD160). 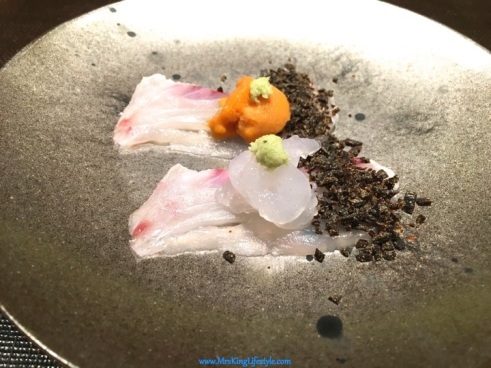 The selection of nigiri sushi included the usual suspects – premium fish such as Otoro, Chu-Toro, Uni, Shima-aji, Kuruma Ebi and Buri. Majority of Jiangle’s fish and seafood are sourced from Japan, and they pride themselves on getting premium produce. Naturally, this attention to details and selectiveness of their ingredients are apparent in their freshness of nigiri sushi. The other courses, which were a medley of small dishes, were quite innovative and very delectable.

Shiro ebi (white shrimps) and liver in vinegar – the chefs advised us to dip the ebi into the vinegar. It was surprisingly tasty ! 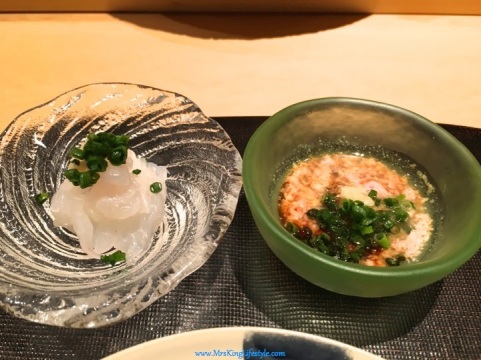 Female kani (crab) – half of the crab shell was filled with jelly and soft roe on top, and the half was crabmeat topped with orange hard roe.

As the evening rolled on and we had some pretty interesting conversations with the sushi chefs, they allowed me to snap a few shots of their innovative creations.

Getting a reservation at this restaurant is a challenge, and I advised booking at least 2 months in advance. There are only 10 seats at the sushi counter, and 3-4 small tables. The choice seats are at the counter in front of the chefs. Jiangle (meaning Soraku in Japanese) is a favourite amongst Taiwanese locals, and also some tourists who usually find it via word of mouth, as Jiangle doesn’t advertise or have a website.

The Michelin Guide for Taipei is expected to be launched in 2018, and many foodies anticipate that Jiangle Kappo Sushi will be awarded its stars.