Singapore, June 2013 – We celebrated my sister’s birthday with a girls’ night out at my current favorite restaurant – Catalunya – a contemporary Spanish restaurant helmed by a culinary team with previous experience at the likes of El Bulli, Santi, Drolma and Sketch.

Inside a glass-encased dome, the restaurant is located at The Fullerton Pavillon with a magnificent view of the Marina Bay. Seated by the windows, we found it the ideal place to take in the panoramic scene of the Singapore River while sipping Spanish red wine.

Foie Gras and Eel “Escalibada” – The foie gras was sandwiched between the grilled aubergines and a slice of eel on the top. The Escalibada is a traditional Catalan dish of smoky grilled vegetables, but in this case, aubergines were used. Because the lighting was rather dim in the restaurant, the photo did not reflect the meticulous layering. The taste was unexpectedly delicious; each bite is finished with the crunchy eel flakes. Must try!

Chorizo Y Estrellados – Fried egg with chorizo on a potato bed was simple but traditional Spanish. If you prefer tortilla, I would suggest Catalunya’s Tortilla de Trampo – not the typical tortilla, which I found to be more flavorful but very heavy.

Calamares – The fried calamares were crispy and the portion was generous.

Suckling Pig Tapa – Although Catalunya is famed for its Traditional Suckling Pig “Segovian Style,” we, three ladies thought the portion (half a suckling pig) would be too much for our appetite. So we opted for the Suckling Pig Tapas, which was cooked in the same manner. Pork was tasty and extremely tender while the skin was crispy. Must Try!

We shared 400 grams of Rib Eye Steak with a side order of Pan Fried Pimientos del Padron . The steak was juicy and succulent, and it was a perfect portion for us. Since my residency in Madrid in the 90s, I had developed a fondness for these pimientos, which are small green peppers. They are most delicious – grilled simply with a bit of salt…Delicioso! 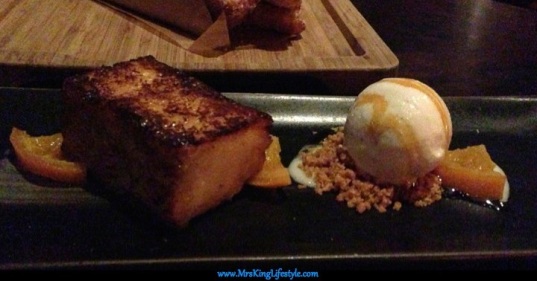 “Torrija” with Smoked Milk Ice Cream – The “Torrija” looked something like a cross between sponge cake and bread pudding. When cut open, it was juicy and had a citrus flavor. The server from Barcelona suggested that we eat it by slicing the cake and mixing it with the ice cream. This was my favorite dessert at Catalunya. 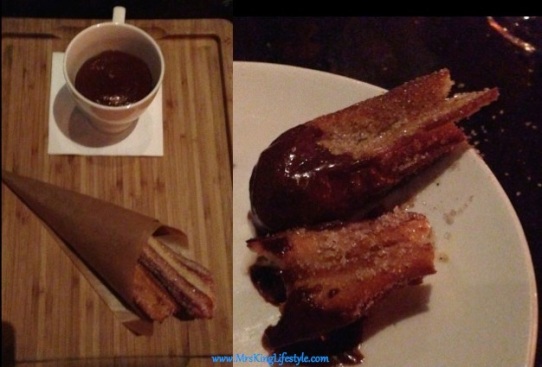 Churros with Hot Chocolate – We were lucky that Churros was the dessert of the day. It was superb. The churros were crunchy on the outside with just the right amount of cinnamon and sugar, and the thick rich chocolate reminded me of San Ginés, the chocolatier in Madrid.

Last but not least, the restaurant prepared a birthday surprise for my dear sis. It was a brownie with hazelnuts and powdered sugar topping. I must say that I liked the pastel blue and white bone china too.

After this sumptuous dinner, we strolled over to Lantern, the rooftop lounge at The Fullerton Bay Hotel. The walkway between the Fullerton Pavilion and the Bay Hotel was breathtaking as the skies and river were lighted up by the “laser show” at the Marina Bay Sands complex across the harbor. Wasn’t that perfect ending to a wonderful girls’ night out?