Capri, 2004 – This morning, I was at class with Little K, but my mind drifted off to the sunny island of Capri in Italy, where Mr. King and I had one of our most memorable vacations. Along with images of Faraglioni, La Piazzetta, Blue Grotto, lemons & corals, Jackie O (a.k.a. Jackie Kennedy) kept flashing in my mind.  Jackie O’s arrival on this tiny picturesque island was instrumental for establishing Capri’s status as the international jet-setter vacation destination.

After her trip to the island, Jackie O single-handedly launched the worldwide trend for sandals in the 1960s. Jackie ordered hers from Costanzo Ruocco, a local artisan, and she created a new style for herself – a “V” shaped design made with metal circles and a black string. Today, the son of Constanzo, Antonio has taken over da Costanzo, and his shop is still one of the few local artisans remaining on the island. (source: www.vogue.it/en/encyclo/fashion/s/capri–sandals‎) 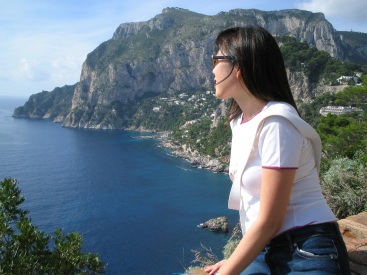 Following the legendary lady’s footsteps, Mr. King & I explored the little streets leading off from La Piazzetta (Piazza Umberto I), pathways around the cliffs to see the Faraglioni and rowed a boat into the Blue Grotto. 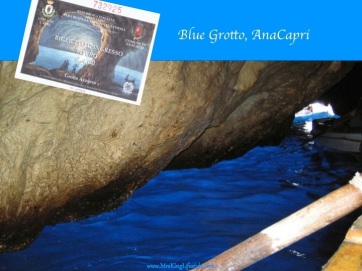 Mr. King and I didn’t actually row the boat into the Blue Grotto, which is one of the several sea caves worldwide to be flooded with a blue light. At the dock, we hired one of several rowboats waiting to bring visitors into the Grotto. The hole, which is barely big enough for a rowboat, serves as an entrance, so Mr. King and I had to lie down inside the boat when entering the cave. While the boatman rowed, he sang an Italian love song, which echoed loudly inside the cave where we saw the glistening blue – extraordinary!

Capri town is most crowded after 12noon when day tourists arrive on the island via ferries from Naples, Sorrento and the Amalfi Coast. The island becomes a calm haven after dark when all the day tourists have departed the island on the last ferries.

There are a number of walking trails, and the natural beauty of this island is breath-taking.  This is a very romantic destination.  So don’t expect to do a day-trip, because you will not want to leave!