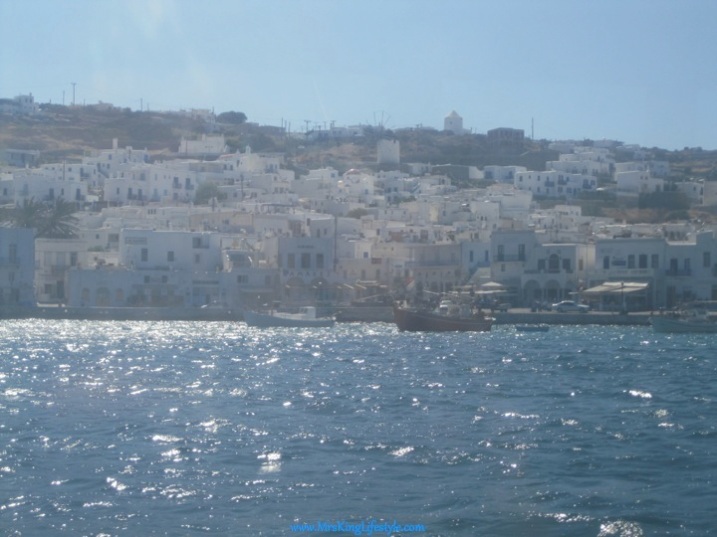 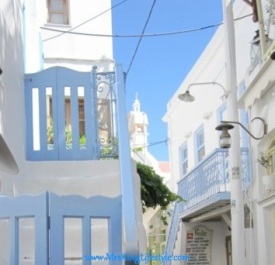 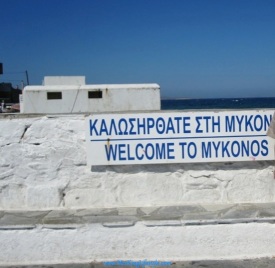 Mykonos, August 2011 – Having explored the Southern side of Mykonos Town (Island Hopping: Mykonos (I)), Mr. King and I spent the day roaming around the Northern side and headed to the elevated area of Ag. Stefanou.

Time for some history and culture! We reached the Archaeological Museum, which contains most of the antiquities found in excavations on the island including monumental statues, reliefs, masks and ancient jewelry that dated back to 5th century BC. The Museum is an intimate structure that offers a glimpse into Mykonos’ past. And it was cool, tranquil – the ideal escape from the summer heat. 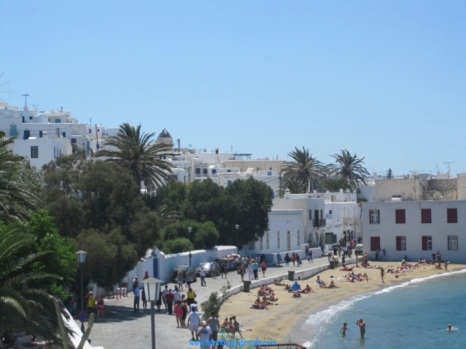 Since the Museum is located on hill, it has an impeccable view of Mykonos harbor. A short and narrow beach is situated in the bay below (off Polikandrioti), where bathers soak up the sun and swim despite its tiny area. This island is renowned for its beautiful sandy beaches, and there are a number of them to choose from. The most popular one is Platis Gialos Beach, which is about 3km away from town center.

Mr. King and I heard that Mykonos town is quite a maze, since it was deliberately built that way as deterrence for pirates in the ancient days. Fortunately, we managed to find our way around the winding narrow alleyways. 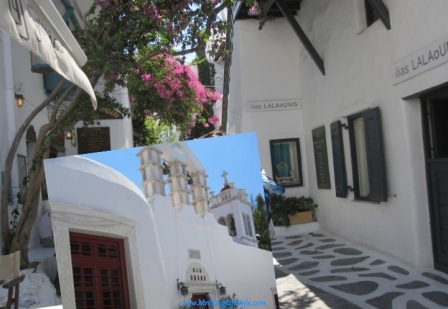 Shopping anyone? On the streets behind Mando Marvogenous Square (Taxi Square), numerous small shops – including the famous Ilias LALAoUNIS known for its jewelry based on ancient Greek designs, and others selling olive oil, soaps, sponges, foodstuffs, souvenirs and the cotton linen blend clothing made in Greece – line the narrow streets. 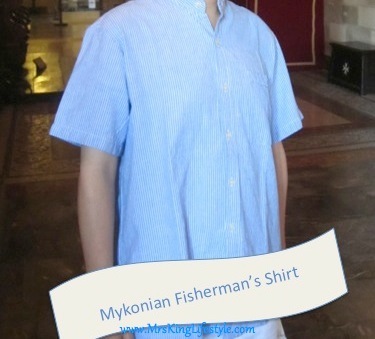 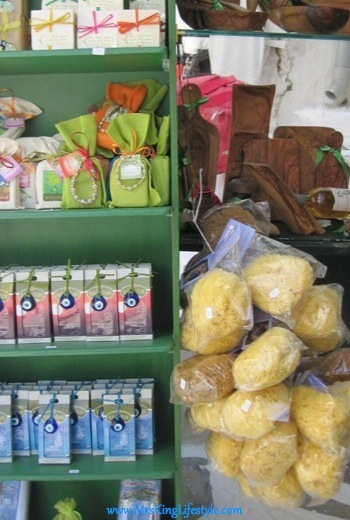 Mr. King found a light blue and white striped shirt at a local tailor.  We were told that the pattern was a typical Mykonos fisherman’s shirt.  A superb (and comfy) souvenir!

We browsed through some embroidery shops, but none compared to Anna Gelou, which is situated near Little Venice. Anna Gelou was established 50 years ago, and today, it still carries Anna’s authentic designs of traditional handmade embroideries. The craftsmanship of the local artisans is delicate and refined.

On Ag. Anargiron (adjacent to Little Venice on the South side of town), Mr. King and I noticed that houses had pre-dominantly blue shutters or doors. However, on the side streets behind Taxi Square, there seems to be more variations in color schemes on the whitewashed architecture. Some houses and churches were adorned with reddish brown windows and doors.

Lunch or Just Hanging Out! The esplanade between Mando Marvogenous Square and Akti Kambani is lined with cafes, bars and restaurants. It is the ideal place to chill out and people-watch since this stretch looks out to the port, which is at its busiest in the afternoon. 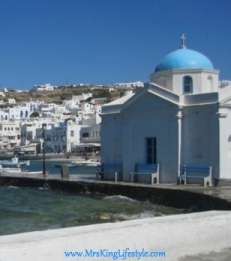 With Mykonos’ rich history and culture, spectacular natural beauty, vibrant nightlife and Greek hospitality, the island continues to be the perfect resort destination for an array of visitors from young singles to international celebrities.