Mykonos, August 2011 – Summer is fast-approaching, and what better to do than island hopping! We seem to be on Jackie O’s trail (Capri: On Jackie O’s trail) again…this time on Mykonos, one of the most popular of the Aegean islands. Despite it being the smallest of the Cyclades, travelers from all over the world are attracted to its sandy beaches, windmills and the scenic whitewashed town – which are some of the best examples of the Cycladic architecture. 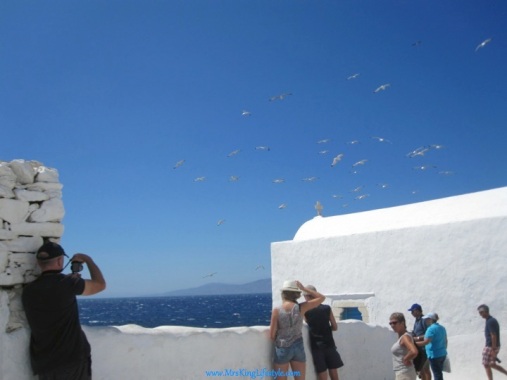 What a beautiful day! Sun was shining brightly. Skies were clear and blue. Little did I expect the ghastly strong wind, which sent hats flying! 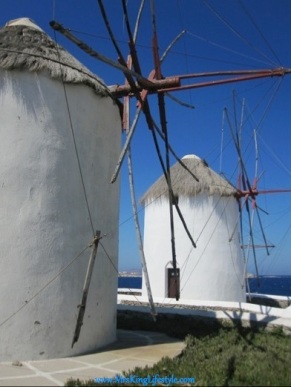 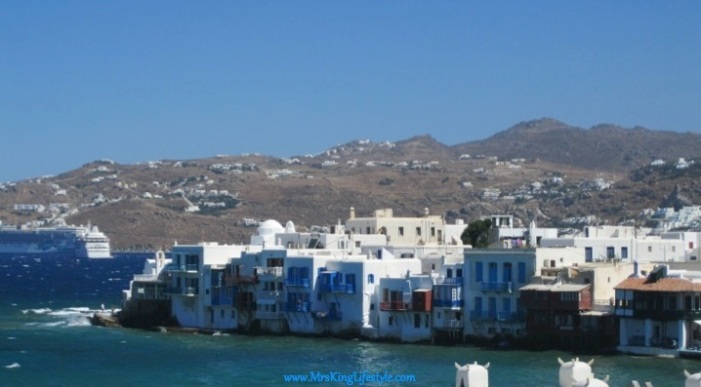 Mr. King and I headed for the famed Mykonos windmills. On route there, we strolled through small winding streets lined with whitewashed houses and cobblestone alleyways. Since it was only 9:30am, the shopkeepers were busy cleaning and tidying up, and we witnessed one person freshening up the cobblestone path in front of his shop with white paint. No wonder the alleys seemed so clean!

We took a quick detour to the neighborhood called, “Little Venice” which are a group of distinguished houses with wooden balconies that hang above the bustling waves, overlooking the sea. The houses were originally built by ship-captains, and today, they are filled with cafes, bars and shops. Since it was morning time, the cafés were nearly deserted, but we heard that nightlife there was bustling and vibrant. 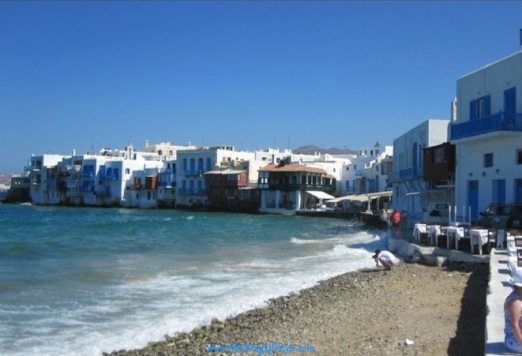 Twenty minutes later, we finally reached five of the most famous Mykonian windmills in the area of Alefkandra. Overlooking the town from a hill, they reminded us of a time when wind power was used to grind the island’s grain. The windmills are the most renowned landmarks of Mykonos. The panoramic views from the windmills were breathtaking, and we had a clear view of Little Venice.

When it was time for lunch, we found our way to Katerina’s and savored their signature dish – Prawn Saganaki, prawns cooked with feta cheese in a spicy tomato sauce. Delicious! Katerina’s was located inside Little Venice. Though Mr. King and I opted for indoor seating, we still had good views of the ocean. The restaurant had a counter of 6 seats on its balcony hanging above the shore below, so those diners seated on the balcony could see the waves directly below their legs (or maybe even feel the splashing sea water!).

Mykonian afternoons at the peak of summer can be sizzling hot, so it is best to find a café to chill out…